Heather Knight runs Marilyn Monrobot in New York, where she and her cohort create "charismatic machine performances" and she helped build the amazing Rube Goldberg machine for OK Go's "This Too Shall Pass". She was recently named Assistant Director of Robotics at Humanity+. She wants you to like robots. Really like them.

"Heather Knight has a thing for robots" 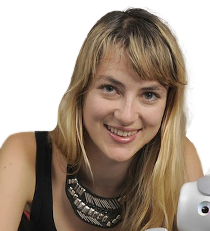 Heather Knight is conducting her doctoral research at the intersection of robotics and entertainment at Carnegie Mellon's Robotics Institute. She is an alumnus from the Personal Robots Group at the MIT, where she earned her bachelor and masters degrees. Her installations have been featured at the Smithsonian-Cooper Hewitt Design Museum, LACMA, SIGGRAPH, PopTech and the Fortezza da Basso in Florence, Italy. Her past work also includes robotics and instrumentation at NASA's Jet Propulsion Laboratory, interactive installations with Syyn Labs (including the award- winning Rube Goldberg machine music video with OK Go), and sensor design at Aldebaran Robotics.

Heather Knight shows robots can teach us a lot about being human. She is particularly interested how autonomous robots gauge and respond to human behaviour through live theatrical performance, explaining that intersecting two fields is a great way to inspire new thoughts and innovation. In her first-of-its-kind demo at TED 2010, she introduced Data, a robotic stand-up comedian that does much more than rattle off one-liners - it gathered audience feedback.

A true pioneer who has worked on several amazing projects already, including developing the touch sensing panel in the head and the infrared detection in the eyes of the robot NAO, Heather Knight warmly and informatively presents her creation of socially intelligent robot performances and sensor-based electronic art.

She presents in English (speaks Spanish, German and intermediate French).