Monty Halls is an author, expedition leader, motivational coach, biologist, television presenter, company director and filmmaker. After five solid years on the road filming series for BBC2, and after the success of Fisherman's Apprentice in early 2012, Monty settled in Dartmouth, Devon to set up his own eco-tourism business. 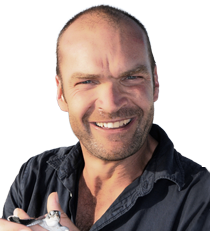 A former Royal Marines officer who worked for Nelson Mandela on the peace process in South Africa, he left the services in 1996 to pursue a career in leading expeditions. Having achieved a First Class Honours degree in marine biology over the next decade, he circumnavigated the globe four times on various projects, leading multi-national teams in some of the most demanding environments on earth. Monty's television career spans over 8 years and includes the BBC's Great Escape series where he lived on the west coast of Scotland, the Outer Hebrides and west coast of Ireland, as well as the BBC's Natural History Unit series Great Barrier Reef and most recently The Fisherman's Apprentice. Monty writes a weekly column for the Daily Mail and Outdoor Fitness magazine and is also a regular contributor for various specialist dive monthly's. In 2002 he was awarded the Bish Medal by the Scientific Exploration Society for his services to exploration.

Drawing on two decades of leading teams in some of the most demanding environments on earth, he backs up his core messages with footage and images from some of the best adventure film-makers and photographers in the business.

Monty has gained a reputation as an extremely dynamic, speaker who combines great entertainment with salient messages for any business or team. His presentations are a different experience from the standard leadership or team building presentation, something genuinely thought provoking, relevant, yet hugely entertaining.

How to book Monty Halls?