Steve Davis OBE dominated the game of snooker throughout the 1980s and became a well known sporting personality. The six-time world snooker champion remains amongst the top 30 players and a member of the commentary team. Steve has diversified his career in recent years, becoming heavily involved in media and broadcasting with the BBC. Appearing on quiz shows including They Think It's All Over and A Question of Sport, Davis also regularly appears as a commentator and TV Presenter for the BBC's coverage of snooker. 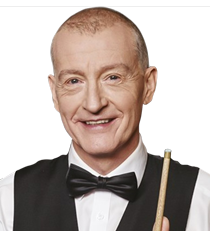 Steve Davis has won a total of 28 ranking and 73 professional tournaments in his career. That's 73 wins from 100 finals! His most important wins are the six World Championships, six UK Championships and three Masters. He was the No.1 player in the eighties, before Hendry came along. Steve was the first to make a ratified maximum break in a major tournament who had a break of 147 against John Spencer in the Lada Classic at Oldham, Greater Manchester in 1982.

Steve is a compelling and engaging speaker, delivering anecdotal tales of his time in the limelight of snooker, as well as some of the most famous moments during his era. Steve has catered for business and social environments alike, making him one of the most accomplished sporting personalities for events.

Steve's dry sense of humour and hilarious anecdotes make him an excellent choice for any sporting dinner or corporate function as an entertaining after dinner speaker.

How to book Steve Davis OBE?