Edward de Bono is widely regarded as the leading authority in the field of creative thinking, innovation and the direct teaching of thinking as a skill. He is the originator of the term Lateral Thinking which has an official entry in the Oxford English Dictionary.

He was ranked in the Thinkers 50 2007, the global ranking business thinkers. 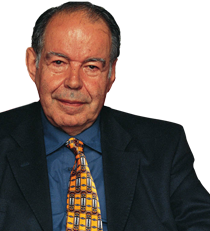 He is also renowned for his development of the Six Thinking Hats technique and the Direct Attention Thinking Tools (D.A.T.T) framework. He was the Chairman of the Council of Young Enterprise Europe which had a membership of 1,500,000 youngsters across Europe, Israel and Russia who set up mini-businesses whilst at school. He also established the World Centre for New Thinking which acts as a platform and channel to make visible New Thinking from any source. Edward acts as advisor to various Governments, cities, regional Governments and global organisations. He has written 70 books with translations into 40 languages and has been invited to lecture in 58 countries.

The main appeal of Edward's work is its simplicity and practicality. His instructions in thinking have been sought by governments and corporations worldwide while his programmes for the teaching of thinking in schools are mandatory in some countries. He teaches his audiences that you can solve problems not by removing the cause, but by designing the way forward, even if the cause remains in place.

Edward individually prepares all presentations to be pertinent to people of all ages or occupation. A master craftsman of the spoken word, his message is succinct, deeply thought out and highly respected.

How to book Edward de Bono?