Paul Merson is a former England international, Arsenal, Middlesbrough, Aston Villa and Portsmouth footballer who retired in 2006. In a career that spanned over 21 years, at club level, Paul made 622 appearances scoring 126 goals. He was capped 21 times for England scoring 3 goals. Following his highly successful football career, he is now a media pundit, appearing frequently on Sky Sports's Soccer Saturday. He has recently made regular appearances on Star Sports Asia, covering EPL games. 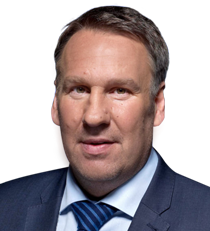 Paul Merson started his career at Arsenal, joining the club as an apprentice, making his debut in 1986. Having reached the peak of his career as he gained selection for Glenn Hoddle's England squad for the 1998 World Cup, his career was put on the line in 1994 when he admitted to being an alcoholic and cocaine addict. In 2006, he also commenced a column for the official Arsenal FC magazine.

Paul Merson is a man who has truly confronted his demons and is not afraid to discuss them openly. He is a joy to listen to and can captivate any audience with the story of his amazing journey. Having played with and against many of the worlds top footballers, he is now an extremely popular after dinner speaker, enlightening everyone with his hilarious, sad, interesting anecdotes from a glittering rollercoaster career at the top of football.

Highly sought-after on the after dinner speaking circuit with a fantastic mixture of stories and anecdotes from his football career, Paul Merson knows how to relax everyone around him.

How to book Paul Merson?