Wasim Akram is an internationally acclaimed personality who has been a professional Cricketer, television commentator and activist of awareness campaigns for diabetes. He is the finest fast bowler ever; pioneer of reverse swing bowling and has headed the cricket team of Pakistan in Test as well as One Day Internationals. He holds world records for taking the most wickets in ODIs. 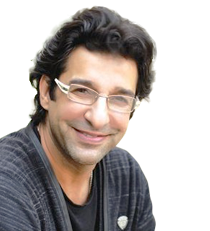 His career started from his college days in 1980s. In 1998 he played for Lancashire Country Cricket Club in England and won the ECB Trophy as their captain. He played a significant role in winning the 1992 World Cup for Pakistan by taking the most wickets - a total of 55 in 38 matches. He is one of three bowlers who have taken four hat-tricks in International Cricket. He is known as 'Sultan of Swing' and holds a Pakistani record of taking 414 wickets in 104 matches in test cricket. He has remained the first bowler in International Cricket who has taken 400 wickets in both forms of cricket.

Being a hero and coach to several teams worldwide, he provides an insight to key issues for leadership, motivation and team work. Very original in thinking and addresses behavioural management topics too.

Wasim has a charismatic personality, full of energy and enthusiasm, very lively and friendly in his presentations.

How to book Wasim Akram?