Alex Partridge is a British rower and an Olympic silver medallist who has been hailed as the future of British rowing. In 2004 Alex surprised everyone by winning the men's pair at the GB National Team Trials with Andy Hodge, however, two months after selection into the crew, Alex suffered a bilateral collapsed lung and his dream to race in the Athens Olympic Games was over and he faced months of medical treatment. For the 2010 World Cup Series Alex raced in the men's four, taking gold in Bled, bronze in Munich and an exceptional gold medal in Lucerne. 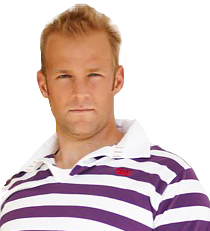 Alex studied technology management at Oxford Brookes University and won his first senior world medal at the age of 20, and has been on the rise ever since. In 2007 the four had a mixed season finishing a disappointing 4th at the World Championships in Munich. In 2008 Alex gained a seat in the men's eight which won silver at the first World Cup Regatta, bronze in the second and gold in the third. He was a member of the gold medal winning men's four at the 2005 and 2006 World Championships but missed out on the chance of Olympic gold in 2004 due to illness which forced his withdrawal from the Olympic four just before Athens. He is also currently pursuing an MBA, at the Henley Business School.

Alex Partridge knows both the successes and setbacks that he has endured and overcome in his sporting life, which he is able to express and show his audiences how everyone is able to use these experiences to achieve what appears to be unthinkable. Alex is also available for personal appearances, workshops, training days, and is an excellent brand ambassador having worked with, and appeared for, brands such as Camelot, Canterbury, Siemens, London Underground, Panasonic and Adidas.

Alex Partridge's motivational addresses are moving, inspiring and memorable. Having experienced the highs and lows of professional sport, he has a compelling story to tell and is well versed in delivering motivating speeches within the corporate market.

How to book Alex Partridge?