Michael Owen was an internationally renowned footballer. Joining Real Madrid from his boyhood club Liverpool in 2004, he was back in the Premiership a year later, signing for Newcastle United in a club record £17 million transfer. He was a true jewel in England's crown playing a major part in England's fortunes. 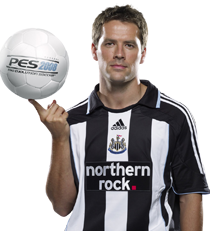 Michael graduated from Lilleshall School of Excellence at 16 and joined Liverpool on a YTS Scheme (Youth Training Scheme). He was on the YTS scheme for 4 months before he signed for the Liverpool senior team on his 17th Birthday, but he didn't get to play until May the next year. He soon became a regular for the Liverpool side and was scoring plenty of goals. Although, he was virtually unheard of outside of the Shankly Gates, he was becoming quite a little hero for Liverpool! In 1997, Michael was given a new lease of life. After completing nearly 1 season with Liverpool, he was told he might be called upon for England's senior game against Chile. Sure enough, he was given the nod, so in February 1998 he walked out onto the pitch at Wembley Stadium as an England First Team International and has since then never looked back.

A world-class striker with just under a goal every two games in international football, Michael's combination of skill, pace and ability to read the game make him a unique talent. A hugely respected footballer Michael offers audiences a glimpse of how he reached the top of his trade and how his dedication to the role brought him success, fame and celebrity.

Known as football's "golden boy" Michael is a true football legend who is available for Q & A and personal appearances.

How to book Michael Owen?