Right Said Fred was formed in 1989 by brothers Richard Fairbrass and Fred Fairbrass from East Grinstead, as well as their close friend Mark Hollins. They scored a U.S. number one single in 1992 with I'm Too Sexy. The follow-ups, Don't Talk Just Kiss and Deeply Dippy were also major U.K. hits. 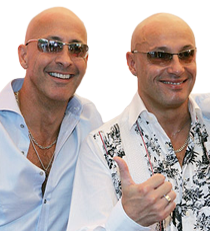 Inspired by the male models that frequented the gym where the Fairbrass brothers worked, the group cut a rough demo of I'm Too Sexy and, convinced that they were on to something, borrowed £1,500 to produce a finished master with a proper mix. Dismayed by the lack of record company interest, promoter Guy Holmes released the single on his own Tug label, and there was no stopping it once it hit the BBC airwaves. Right Said Fred's non-album single Stick It Out, a benefit for Comic Relief, became their fourth Top Five hit in the U.K. in 1993. They have been working since 1991 in Europe, mainly in Germany, and have enjoyed sell-out tours worldwide.

Right Said Fred captures the essence of pop music and livens up any event.

How to book Right Said Fred?