Andrew Neil is a publisher, writer, businessman and broadcaster. He is Chairman and Editor-in-Chief of Press Holdings, owner of The Spectator and various titles around the world. On-screen he has regularly scrutinised Westminster and leading figures across politics on shows including Daily Politics and Politics Live. 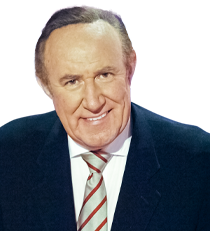 During his 25 years with the BBC Andrew presented a variety of live political shows from The Andrew Neil Show to Politics Live on BBC2. For 16 years, until 2019, he presented the award-winning cult show, This Week on BBC1. He presented three editions of the Daily Politics on BBC2 every week from 2003 til 2018 and the Sunday Politics on BBC1 (2012 til 2017). In the course of his career, Andrew has interviewed seminal world leaders such as Kofi Anan, Richard Nixon, and Ronald Reagan; Margaret Thatcher and Boris Johnson; Boris Yeltsin; Nicholas Sarkozy and PW Botha. During his career, Andrew has been a House of Commons political correspondent in London, White House correspondent in Washington DC and Wall Street correspondent in New York - all for The Economist. He was made British Editor of The Economist in 1982.

At the forefront of world news and digital television developments Andrew is well placed to comment on the information revolution. A widely respected opinion leader and a businessman with real and current knowledge, he will help you plan your future communications strategy. As well as being a versatile commentator on British and US politics and business, Andrew enjoys a ringside seat on all major developments in media and technology.

Informal but professional, humorous but thought-provoking, he will add pace and energy to your event.

How to book Andrew Neil?