Viswanathan Anand, acclaimed as the Fastest Brain in the world, is considered one of the best contemporary chess players in the world, especially renowned for his versatility. He is a five time winner of the World Chess Championship and was the undisputed World No.1 from 2007 to 2013. 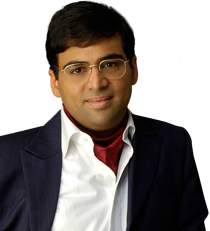 The former World Chess Champion is among the only two persons to have won the Classical, Rapid, and Blitz world championships and the only one to have won the world championship playing in Match, Tournament and Knockout formats. Anand started playing the game at the age of six years old. He turned professional early on and became the National Sub-Junior Chess Champion at the age of 14. More success followed when at the age of 15 he won the title of International Master and became the youngest Indian to do so. At the age of 18, Anand became India's first Grandmaster. He won his first World Championship in 2000. He is known to be an unassuming and simple person who is liked by all, including his former rivals.

Known as the "One man Indian Chess revolution" whose ambition it is to be able to take chess to the grass roots level, Anand has throughout his career, for more than 20 years now, been way ahead of his times and peers. His dream is to make chess available to everyone.

Viswanathan Anand is a truly international performer who keenly promotes the game in his vivid presentations, through innovative methods and fascinating insights that touch his audiences.

He presents in English and is fluent in Spanish.

How to book Viswanathan Anand?