Vanessa-Mae is a highly celebrated and multi-million-selling worldwide phenomenon and breakthrough violinist who has made a statement in both the pop and classical world with her blend of both streams of music in what is known as "violin techno-acoustic fusion". 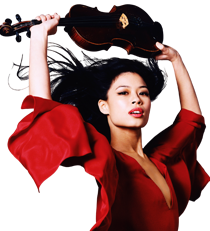 Vanessa-Mae is credited as being the youngest violinist to record the violin concertos of Beethoven and Tchaikovsky. At the age of 13, she had already recorded and released 3 albums with a total of 12 albums during her musical career to date. Her worldwide sales have topped 8 million units so far, earning more than 40 international platinum awards. Vanessa-Mae is a remarkable, unique entertainer who performs spectacularly in an astounding range of venues across the world, ranging from rock festivals, sports championships and international awards ceremonies, to performing for the Royal Family and exclusively for the 26 heads of the Asian-European governments.

Vanessa-Mae is already a highly experienced and proficient performer, having performed as a globally top rated musician for over a decade. When she performs, Vanessa-Mae conquers the stage and delivers a mesmerizing show, forever changing the way her audiences hear the violin and offering a fascinating and refreshing take on this beautiful instrument. One of the most striking women on the musical stage today, Vanessa-Mae has been hailed as one of the "50 Most Beautiful People in the World" by People Magazine and one of the "World's Most Beautiful Women" by FHM.

Vanessa-Mae consistently wows the world with her electrifying performances on the violin. Her stunning stage presence, musical style and innate flair add to her appeal as one of the world's greatest violinists and most enthralling performers.

How to book Vanessa Mae?