Worldwide Singing Sensation, Winner of the Third Series of the British, The X Factor

Leona Lewis is a world renowned British singer and songwriter. Her debut Spirit became Britain's fastest-selling debut album of all time, selling over 6.5 million copies worldwide. In 2008, she set a record in the UK for the fastest selling download-only release with her cover of Snow Patrol's song Run which sold 69,244 copies in 2 days.

"I think she's one of the best singers we've seen in this country for a long, long time" - Simon Cowell 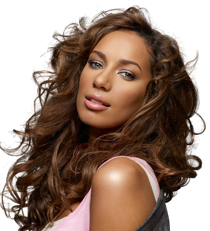 Born and raised in London, Leona Lewis won a talent show at the age of 13 and devoted herself to music thereafter, eventually graduating from the prestigious BRIT School for Performing Arts and Technology. While working as a receptionist and pizza waitress and writing her own material, Leona Lewis auditioned for The X Factor in the summer of 2006 and won the third series competition in December of that year. Leona Lewis' debut single, a soulful cover of A Moment Like This, was the number one single in the U.K. at the turn of the year, including the coveted "Christmas Number One". Her second album, Echo, was given a worldwide release in 2009.

Leona Lewis' striking beauty, charmingly down-to-earth personality, and huge, soaring voice has taken over the UK and further afield. Her disarming modesty is part of what has endeared Lewis to her fans. Every once in a while, an artist comes along whose talent is so undeniable that it inspires everyone who encounters it. She is an artist who will be a true star for many years to come.

Leona Lewis' audiences are knocked out by her range, her versatility, and the pure beauty of her voice. Her passion for singing comes through loud and clear. She can seemingly slow time and capture everyone's attention in her songs.

How to book Leona Lewis?