"The man with all the questions" BBC 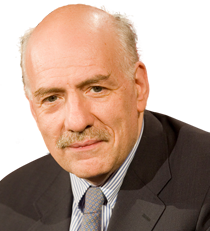 Tim holds a BA Honours degree in modern languages from Oxford University. Based in Warsaw from 1979, he became the BBC's Europe Correspondent in 1982. Two years later he went to Moscow. In 1989 he moved to Washington where he was based until 1989. Tim was the founder and chairman of The Doha Debates which were broadcast across the globe on BBC World News from 2004 until 2012. In 1982, he was awarded the British Academy of Film and Television Arts 'Richard Dimbleby Award'. In 2000 and 2001 he won Britain's prestigious Royal Television Society Interviewer of the Year Award.

With a wealth of knowledge of current and world affairs and having met and interviewed thousands of people, few are better qualified than Tim Sebastian to talk in depth and knowledgeably about the current economic and political landscape. Tim is also an excellent host and his skills as a conference moderator are unparalleled.

A meticulous interviewer, speaker and moderator Tim is renowned for his in depth preparation, relaxed style and professional approach.

He presents in English and also speaks Russian and German.

How to book Tim Sebastian?