Vilayanur S. Ramachandrana is a neuroscientist known for his work in the fields of behavioral neurology and visual psychophysics. He is the Director of the Centre for Brain and Cognition at the University of California, San Diego, and an adjunct professor at the Salk Institute. He is author of the acclaimed book 'Phantoms in the Brain' that formed the basis for a two part series on Channel Four. 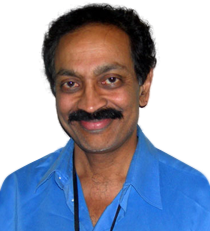 Ramachandran initially trained as a doctor and subsequently obtained a Ph.D. from Trinity College at the University of Cambridge. In 2005 he was awarded the Henry Dale Medal and elected to an honorary life membership by the Royal Institution of Great Britain, where he also gave a Friday evening discourse (joining the ranks of Michael Faraday and dozens of Nobel Laureates) Most recently the President of India conferred on him the second highest civilian award and honorific title in India, the Padma Bhushan and TIME magazine named him on their list of the 100 most influential people in the world.

V.S. Ramachandran's investigations into phantom limb pain, synesthesia and other brain disorders allow him to explore (and begin to answer) the most basic philosophical questions about the nature of self and human consciousness.

V.S. Ramachandran is a mesmerizing and highly interesting speaker who looks deep into the brain's most basic mechanisms.