His Excellency Shaukat Aziz became the first Prime Minister of Pakistan to complete a full term in office. He understands the role of banking, finance, investment and consumer credit in economic growth of a nation, focusing on building strong banking, investment and finance sectors in Pakistan to underpin its economy. 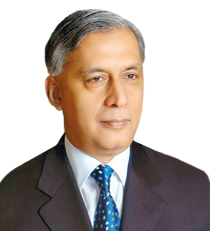 Shaukat Aziz graduated with a Bachelor of Science degree from Gordon College, Rawalpindi, in 1967. He obtained an MBA Degree in 1969 from Institute of Business Administration (IBA) in Karachi. It was during his studies at the IBA that he secured an internship at Citibank and began his banking career, serving in various countries including Pakistan, Greece, United States, United Kingdom, Malaysia, Philippines, Jordan, Saudi Arabia, and Singapore. Before taking leave from Citigroup, he headed its global Private Banking Division and, at the height of his 30-year career in global finance, progressed to a senior post with the bank in New York. He became Finance Minister in 1999. In 2001, Mr. Aziz was named "Finance Minister of the Year" by the prestigious Euromoney and Bankers magazines.

Shaukat Aziz is a renowned leader who shares his highly respected views on the most important international relations issues confronting the world today with worldwide audiences. Known for securing significant loans from the United States in return for support of the war against terror, Aziz restored Pakistan's credibility within the global market, he is also known for his strategic approach, transparency and ability to focus on doing what is best, not politically expedient.

Having presided over impressive economic growth in Pakistan, Shaukat Aziz expertly and powerfully addresses the challenges of the global economy, reform and the role of emerging markets.

How to book His Excellency Shaukat Aziz?