Shane Warne is widely regarded as one of the finest leg spin bowlers in the history of cricket. In 2000, he was selected by a panel of cricket experts as one of the five Wisden Cricketers of the Century, the only specialist bowler selected in the quintet. For all his on-pitch and off-pitch controversies, Warne's place in cricketing posterity has been assured by the fact that he has overturned the domination of cricket by fast bowling that had prevailed for two decades before his debut. 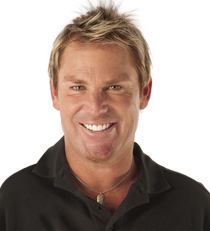 Shane Warne played his first Test match in 1992 and his 708 wickets was the record until 2007 for the most wickets taken by any bowler in Test cricket. He took over 1000 international wickets (in Tests and One-Day Internationals). In 2008 he announced his retirement from playing first-class cricket. He was captain of Hampshire for three seasons, from 2005 to 2007. In March 2008, Warne signed to play in the Indian Premier League for the Jaipur team, Rajasthan Royals in the first edition of the tournament, where he played the roles of both captain and coach.

Shane Warne revolutionised cricket thinking with his mastery of leg spin, which many cricket followers had come to regard as a dying art due to its immense difficulty of execution. Since retirement, Warne has been doing work for the Shane Warne Foundation which assists seriously ill and underprivileged children.

As one of Australia's greatest cricketers Shane Warne style, character and sense of humour will make any event unforgettable. After dinner, Shane reflects on his career, from the ball that announced his arrival on the world stage to playing his mum in a lager commercial.

How to book Shane !DECEASED Warne?