One of the Most Celebrated Writers of Our Time, Winner of the Booker Prize

Sir Salman Rushdie is one of the most celebrated and controversial authors of our time -- of any time. He achieved fame with his second novel, 'Midnight's Children', which won the Booker Prize in 1981. A brilliant provocateur, he's penned a handful of classic novels, overcome an infamous fatwâ, received a Queen's Knighthood for "services to literature" in 2007 and become both a pop culture icon and one of the most thought-provoking proponents for free speech today. 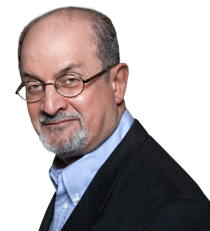 Salman Rushdie went to school in Bombay and at Rugby in England, and read History at King's College, Cambridge. After graduating, he lived with his family who had moved to Pakistan in 1964, and worked briefly in television before returning to England, beginning work as a copywriter for an advertising agency. Between 2004 and 2006 he served as President of PEN American Center, and continues to work as President of the PEN World Voices International Literary Festival, which he helped to create. He has received the Freedom of the City in Mexico City, Strasbourg and El Paso, and the Edgerton Prize of the American Civil Liberties Union. He holds the rank of Commander in the Order of Arts and Letters - France's highest artistic honour.

In his spellbinding lectures, Sir Salman Rushdie braids together the worlds of literature, politics and philosophy -- a show of intellectual pyrotechnics and deadpan humour that conveys fully the texture of modern life. He speaks about the major themes coursing through his writing, his life and our world: freedom of expression, religion, pop culture, Muslim culture, current events at home and abroad, East-West relations, and the role of the artist to shape our understanding of the world.

Author of 'Midnight's Children' and 'The Satanic Verses', Sir Salman Rushdie's speeches are quite simply unforgettable. For those more interested in his writing, he touches on storytelling, the magical realism he made famous, and the unique sensibility of his self-proclaimed "globe-swallowing, capricious books". Few authors are as enrapturing in person as Rushdie is, or as fully embracing of their well-earned place in the spotlight.