Ruud Gullit is a world renowned Dutch football coach and former player. He is currently an analyst and pundit for the Eredivisie on Tien TV and on Sky Sports for UEFA Champions League games.

"One of the most internationally recognized footballers of the last decade" 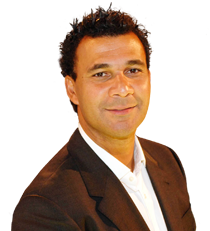 Ruud became the world's most expensive player in 1987 when he moved from PSV Eindhoven to Milan for a then record £6.5 million. He ended his career as a professional football player with Chelsea FC where he stayed on to manage the London club. Ruud has also managed clubs such as Newcastle United FC and Feyenoord Rotterdam. Ruud is one of the most successful footballers in recent history, both as a player and a manager. Ruud has raised money for various charities participating in ambassador duties for UNICEF. In 2006 Gullit hosted a chat show on Dutch TV interviewing, amongst others, Nelson Mandela. He also appeared as a pundit for ITV during the 2006 FIFA World Cup.

With his distinct looks, Ruud draws on the lessons learned on the pitch demonstrating to audiences the importance of teamwork and leadership both in business and in our personal lives. With his sound knowledge of these subjects he can adapt his presentations to suit any corporate event.

Ruud is an experienced speaker and media personality whose inspiring presentations are always well received and highly enjoyable. Ruud is equally at home whether speaking, presenting awards or hosting an event.

He presents in English, Italian, Dutch and German.

Give us a call or send us an e-mail to find out exactly what Ruud could bring to your event.

How to book Ruud Gullit?