Award-winning Historian & Biographer, Author of 'India After Gandhi: A History of the World's Largest Democracy'

Ramachandra Guha is acknowledged as a world authority in three distinct fields of scholarship, pioneering in the field of environmental history in South Asia, having authored several landmark essays on environmentalism and being seen as a pioneer in the field of sports history. He is a columnist for The Telegraph, Khaleej Times and The Hindustan Times newspapers. He is a fellow of Indian Institute of Management Calcutta. A historian and journalist, he is author of 'India after Gandhi: The History of the World's Largest Democracy', edits 'The Picador Book of Cricket' and is a regular columnist with The Telegraph of Calcutta. 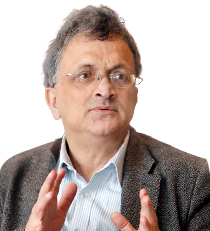 Ramachandra Guha graduated from St. Stephen's College, Delhi with a BA in Economics and then attained an MA from the Delhi School of Economics (University of Delhi). He then went to Indian Institute of Management Calcutta, where he did a Fellowship (equivalent to a Ph.D.) on the social history of forestry in Uttaranchal, that focused on the Chipko movement, which was later published as 'The Unquiet Woods'. His books and essays have been translated into more than twenty languages. His essay 'Radical American Environmentalism and Wilderness Preservation' has been reprinted in more than thirty anthologies.

With books covering a wide range of themes, including a global history of environmentalism, a biography of an anthropologist-activist, a social history of Indian cricket, and a social history of Himalayan peasants, Ramachandra Guha is a ground-breaking pioneer, who is regarded as one of the hundred most influential public intellectuals in the world by Prospect and Foreign Policy magazines. He has emerged as the most prominent chronicler of India's past and of its present and he is very much in demand at prestigious events worldwide.

The author-historian-sociologist-cricket expert-environmentalist, Ramachandra Guha has own direct no-nonsense, and sometimes controversial, style. One thing you can't accuse Ramachandra Guha of is mincing his words.

How to book Prof. Ramachandra Guha?