Pedro Solbes chairs the European Financial Reporting Advisory Group, created to assist the European Commission in the endorsement of International Financial Reporting Standards. He is a highly respected and pivotal figure in Europe's political arena. From 2004-2009, he was Second Vice President of the Government of Spain until his resignation. He is the former President of the Executive Committee at FRIDE, a think tank that aimed to provide the best and most innovative thinking on Europe's role in the international arena.

"A respected political and financial voice" 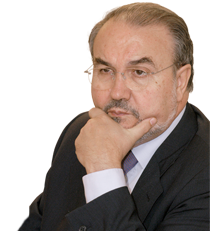 Pedro Solbes attained his Doctorate in Political Sciences from the University of Madrid, Bachelor of Law from the University of Madrid and Diploma in European Economics from the Université Libre de Bruxelles. He was European Commissioner of Economic and Monetary Affairs from 1999 to 2004. He was Minister of Agriculture, Food and Fisheries and later became Minister of Economics and Finance, a position under which he led reforms to end Spain's economic crisis by establishing the foundations for the adoption of the euro, and achieving three consecutive years of public surplus.

Highly respected Spanish economist, Pedro Solbes delivers powerful keynote speeches on integration, change management, and the global economy with a unique and experienced perspective. Pedro Solbes discusses current global economic trends, their impact on Europe, the United States, and Asia, and the benefits that can be obtained in this dramatic economic landscape.

With more than 30 years of experience in politics, Pedro Solbes expertly delivers an experienced and informative analysis of the global economy.

How to book Pedro Solbes?