Sir Richard Branson is the eccentric and outspoken Chairman of the Virgin Group. An experienced daredevil, Branson has raced powerboats across the ocean and has set distance records in hot air balloons. His unconventional style of living is only a part of his undeniable knack for beating impossible odds in business and in life.

"Richard Branson has got the Midas Touch" 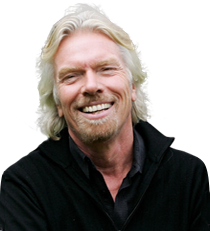 Richard Branson received his education at Stowe School, where he established a national magazine entitled Student at the age of sixteen. He started a Student Advisory Centre at 17, aiming to help young people. At twenty years old, he founded Virgin as a mail order record retailer and a short while later; he opened a record shop in Oxford Street, London. In 1972, a recording studio was built in Oxfordshire where the first Virgin artist, Mike Oldfield, recorded Tubular Bells, later released in 1973. In his latest venture Richard Branson announced the signing of a deal under which a new space tourism company, Virgin Galactic, will license the technology behind Spaceship One to take paying passengers into suborbital space. In 2009 Thinkers 50, the global ranking of management gurus, placed him among the top ten most influential thinkers.

In his presentations Richard Branson talks about his business philosophies as a "transformational leader" with his unique business strategies. He stresses that the Virgin Group is an organization driven on informality and information, one that is bottom-heavy rather than strangled by top-level management.

A charismatic and charming individual, Richard Branson talks candidly about his business ventures and the leadership skills which have made him into a truly global player.

How to book Sir Richard Branson?