Rigoberta Menchú Tum is a 1992 Nobel Prize Winner and Human Rights Activist. She is a renowned leading advocate of Indian rights and ethno-cultural reconciliation, not only in Guatemala, but in the Western Hemisphere generally, and her work has earned her several international awards. 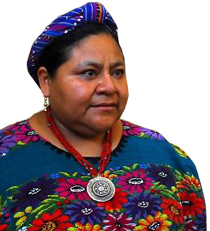 Born in 1959 in the village of Chimel, Guatemala, a community continuing the millennium-old Maya-Quiché culture. In 1979, Rigoberta joined the CUC (Peasant Unity Committee). That year her brother was arrested, tortured and killed by the army. The following year, her father was killed when security forces in the capital stormed the Spanish Embassy. Shortly afterwards, her mother also died after having been arrested, tortured and raped. Rigoberta became increasingly active in the CUC, and taught herself Spanish as well as other Mayan languages than her native Quiche. In 1980, she figured prominently in a strike the CUC organized for better conditions for farm workers on the Pacific coast, and on May 1, 1981, she was active in large demonstrations in the capital.

The breadth and depth of her knowledge and experience is unique. Rigoberta has great insights into the social justice and human rights arena as well as globalisation and sustainable development.

A highly emotional and forceful speaker, the flamboyant Guatamalian is now in great demand as a speaker on political and human rights issues at conferences the world over.

She presents in Spanish.

How to book Rigoberta Menchú Tum?