Ricardo Lagos is a lawyer, economist and social democrat politician, who served as President of Chile from 2000 to 2006. Since 2007 he has served as a Special Envoy on Climate Change for the United Nations. He inaugurated his own foundation in 2006 called Democracia y Desarrollo ("Democracy and Development") in Santiago. 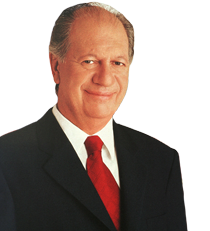 Ricardo Lagos earned a Ph.D. from Duke University and then became a visiting professor at the University of North Carolina at Chapel Hill in the political sciences department. He was professor of economics in the School of Law of the University, and between 1971 and 1972 he was Director of the Institute of Economy. He was later named Director of the Latin American Council of Social Sciences. He has worked in various roles for the UN including ambassador and being in charge of Project UNESCO, of their Development Programme (UNDP) in Buenos Aires. In 1990, he was named Minister of Education and in 1994 Minister of Public Works. In 2007, Brown University announced that he would teach at the Watson Institute for International Studies for a period of five years.

Ricardo Lagos is one of South America's most influential and successful economists. He has also enjoyed advising all the governments in the South American continent on the matter of employment. He offers in depth insights into South American politics and economics as well as providing in depth knowledge of the global effects of climate change on the world's leading economies.

Ricardo Lagos' powerful presentations are memorable for his charisma, astuteness and his strength of character.

How to book Ricardo Lagos?