Captain David Blakeley was a commander in the secretive British military unit The Pathfinders, also known as 'The Ghost Platoon.' They are trained to freefall 'James Bond' style from extreme high altitude, wearing oxygen masks and special survival suits. They work in small elite teams parachuting behind enemy lines, where they carry out extremely high-risk, sabotage, kill or capture missions.

"A true hero with an exhilarating leadership story" 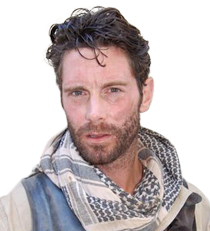 David led the most audacious mission of the Iraq War, commanding a nine-man patrol going deep behind enemy lines - subject of his Sunday Times Bestselling book, 'Pathfinder', which has featured in all major British media as "the untold story of a secret elite British unit". Surrounded by thousands of enemy forces and abandoned by coalition command, they were left to fight their way out of the enemy's backyard. Miraculously, they did so, without losing a single member of their patrol. At 21 years of age David was promoted to be the youngest Captain in the British Army, going on to serve in Northern Ireland, Kosovo, Sierra Leone, Afghanistan and Iraq. Since leaving the military he is working with TV and Film companies. He has been confirmed for a Discovery channel TV show.

David demonstrates, using practical methods and techniques, what individuals and organisations need to do to integrate to help them moving forward to a unified goal successfully. He shares extreme credible experiences, mind-sets and techniques which people can use to improve their performance and go beyond any boundaries.

David is a dynamic and naturally gifted storyteller and his action packed, spellbinding stories are guaranteed to captivate, inspire and stir the imagination of audiences.

How to book Captain David Blakeley?