Linford Christie is a former British sprinter who specialised in the 100 metres. His impressive title collection includes an Olympic, a World Championship, three European, three Commonwealth, ten European Cup and four World Cup medals. Since his retirement, Linford has coached a number of top British athletes to success, including Olympic medals for both Darren Campbell and Katherine Merry. Linford was part of the successful London bid for the 2012 Olympic games. Aside from coaching, Linford has an active role in his own Sports Management Company "Nuff" Respect. 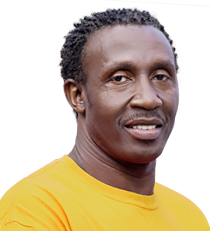 Linford became the Olympic 100m Champion after winning the Gold Medal in Barcelona, 1992. In an International career spanning seventeen years, Linford competed over 60 times for his country and won more major championship medals, 23, than any other British sprinter. He is the only British athlete to have won Gold medals in the 100 metres at all four major competitions and was the first European to have run sub ten seconds. His fastest time 9.87 seconds, recorded when he won the 1993 World Championship in Stuttgart, is the European record. Amongst the numerous awards bestowed upon Linford was the 1993 BBC Sports Personality of the Year and European Athlete of the Year.

Linford is a great motivator and using the lessons he learned on the way to achieving his success, he demonstrates to audiences how to achieve their own goals and sets them on the path to winning ways both on a professional and personal basis.

Linford is a motivational and after dinner speaker with a relaxed yet experienced style that is also perfect for awards hosting. Friendly and approachable he speaks openly to his audiences, sharing his experiences and knowledge about achieving the best from oneself.

How to book Linford Christie OBE?