Esther Dyson is an authority on emerging digital technology and considered a founding member of Digerati. She is an active angel investor in a variety of start-ups, focusing on technology, health care, human capital and aerospace. Esther is Chairman of EDventure Holdings and since 2013 HiCCup, a startup that will foster and coordinate citywide health intervention programs. In 2008 and 2009, she lived in Star City, Moscow, training as a backup cosmonaut. Apart from this brief sabbatical, she is an active board member for a variety of start-ups.

"Esther Dyson has devoted her life to discovering the inevitable and promoting the possible." 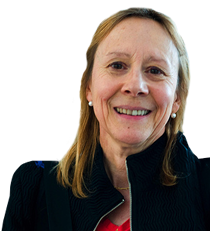 She has a BA in economics from Harvard and was founding chairman of ICANN from 1998 to 2000. In addition, she wrote the best-selling, widely translated book 'Release 2.0: A Design for Living in the Digital Age', published in 1997. Her board seats include 23andMe, Airship Ventures, Boxbe, Voxiva, Eventful, Evernote, IBS Group (Russia, advisory board), Meetup, Midentity (UK), NewspaperDirect, Yandex and WPP Group. Some of her other direct IT investments include Flickr and Del.icio.us.

As an investor and respected commentator, Esther Dyson focuses on the impact of technology, new business models and new emerging markets. Her analysis and predictions on how these factors will affect and shape business today but also in the future provide fascinating insights for corporations all over the world.

Esther Dyson is a regular keynote speaker at major industry events in Europe, including the World Economic Forum in Davos. She likes to combine a short, punchy keynote followed by a lengthy interactive session.

She presents in English and is also fluent in Russian.

How to book Esther Dyson?