Ben Ainslie is one of the most successful sailors in Olympic history, winning medals at five consecutive Olympics from 1996 onwards, including gold at the four Games held between 2000 and 2012. Ben demonstrates the physicality, techniques and strategic nous needed to compete at the highest level. 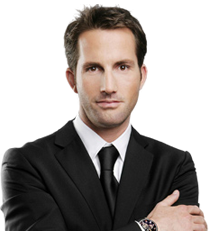 Ben started sailing at a young age by 12 he was competing in the World Championships. In 2008 Ben secured an unprecedented fifth world title, at the Finn Gold Cup in Melbourne; he already held the world record for the number of wins in this long established and legendary Olympic class. Beijing 2008 was Ben's fourth Olympics, where he won Gold for a third time. In 2007, the British America's Cup Campaign "Origin" announced Ben as skipper for the 33rd America's Cup challenge in 2009. He has received an Honorary Doctorate in Law, and an Honorary Degree in Sport Science, as well as being awarded a CBE in the 2008 New Years Honours List. In 2013 Ben received a knighthood and has also been nominated as BBC Sports Personality of the year in 2012 and 2008.

A brilliant motivator, Ben Ainslie CBE shows audiences exactly what it takes to become an Olympic Champion. He is an experienced motivational and interactive speaker who draws on his successes and hard work for the benefit of many companies.

One of Britain's greatest ever Olympians, Ben's vivid presentations provide his audiences with insights into the preparation and efforts that go into being an Olympic Champion.