Rebecca Romero's gold at the 2008 Beijing Olympics meant she was the first British woman in history to win an Olympic medal in two entirely different sports. She was also a contender for BBC Sports Personality of the Year 2008 and joined her team, led by Chris Hoy, as the winners of the BBC Sports Team of the Year 2008. She has won World Championships in both sports. She was appointed an MBE in the 2009 New Year Honours. 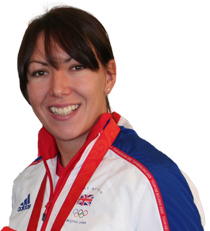 Rebecca has a degree in Sports Science and English and a diploma in Marketing Communications. Suffering from a persistent back injury, she retired from rowing in 2006. She later took up track cycling, making rapid progress, specialising in track endurance events. Approached by British Cycling to try out, she won her first race to become British Champion and made the World Championship team in 2007.

Rebecca Romero MBE's tremendous success in both rowing and cycling is proof that determination, ability and sheer hard work can allow you to fulfill your dreams. Her vivid story of how she became the first British woman ever to compete in two different sports at the Olympic Games is highly motivating, inspiring and respected.

The enigmatic Olympic champion, Rebecca has often been described as the most interesting sportswoman in Britain and her presence at any event adds prestige and charm.

How to book Rebecca Romero MBE?