Milena Kaneva is a journalist who has covered humanitarian crises and genocide (Rwanda), shooting reports in Eastern Europe, Africa, South America and Asia. Her exclusive interview with Aung San Suu Kyi, the Nobel Prize laureate kept under house arrest by the military dictatorship, connected her to Burma forever. In 2000 she produced her first long-form documentary, The Initiation, about female genital mutilation in Mali, and won first prize at the Festival of Due Mondi. She has become an activist herself, creating the "Freedom from Fear Foundation" to expose human rights problems, to promote and help causes around the world.

"If people around the world know the truth, there is a chance for change. Milena's film makes it happen!" Vaclav Havel 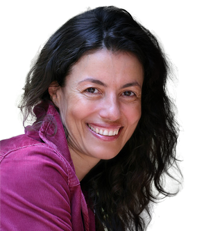 Bulgarian born Milena Kaneva studied acting at the Sofia Theater and Film Academy. She moved to Italy in 1987, before the fall of the Berlin wall and began a career as a journalist and producer with the news agency WTN, later APTN. The documentary Total Denial was written, produced and shot by her, the result of six years of hard work in the jungles of Burma and the US Courts. It won her the Vaclav Havel Human Rights award in 2006 and has been shown in more than 50 festivals around the world. She is producing and directing her latest documentary Freedom from Fear about the non violent fight for democracy of the Buddhist monks and the Nobel Peace laureate Aung San Suu Kyi.

Milena Kaneva talks about her firsthand experience in gathering testimonies of slave labour, rape and the female genital mutilation. With her chameleon like capacity to transform from actress, to journalist, producer and director, camerawoman and editor- she inspires young people to try and achieve what seems "impossible".

In her highly sought-after presentations, Milena accompanies her speeches with excerpts from her films and video material and anecdotes about her totally independent filmmaking.

She presents in English, Italian and French.

How to book Milena Kaneva?