Kriss Akabusi is most famous for his achievements in athletics where his greatest individual triumph was his Gold Medal in the 1990 European Championships. He is currently the CEO of The Akabusi Company, a corporate communications and training company. 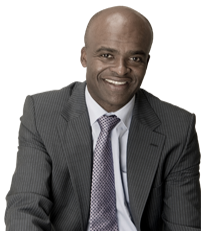 Kriss began his international athletic career in 1983 as a member of the 4x400 metre relay squad and will always be remembered for helping Britain clinch the Gold and beat the Americans in the World Championships in Tokyo in 1991. In 1992 as three times Olympic medallist, World, European and Commonwealth Champion Kriss was awarded the MBE by Her Majesty The Queen in recognition of his services to the country through athletics. His start in television began when he presented the Big Breakfast; this was followed by a full time position as co-presenter of BBC'S Record Breakers. He has presented various children's programmes and appears regularly on game and chat shows where the brief is "fun and entertainment." He is also an accredited personal coach, having qualified at the Hudson Institute of Santa Barbara and is one of only 4 qualified Hudson Institute coaches in the UK.

One of Britain's most recognised and respected motivational speakers; Kriss offers audiences advice on becoming an achiever in any chosen field. He also demonstrates the importance of teamwork and self belief. He engages with communicating high energy, inspirational messages from the conference platform or creating exciting, motivational workshops and awards presentations.

Sportsman and TV personality, Kriss's inspirational and high energy presentations are guaranteed to leave audiences feeling energised and ready to achieve their ambitions.

How to book Kriss Akabusi MBE?