Ian Rush is quite simply one of the finest natural penalty-box predators the game has ever seen. With a phenomenal 346 goals in all competitions, Ian Rush is Liverpool Football Club's all-time leading goal scorer in all competitions. Since retiring as a player Ian has worked as a television football pundit.

"One of the Greatest Strikers in the Modern Game" 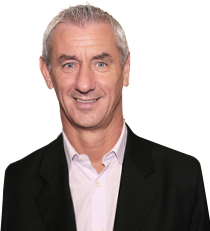 Ian is a Welsh former footballer who played for Liverpool F.C. and is the club's all-time leading goal scorer during his two spells at the club. Regarded as one of the greatest ever Liverpool players, Ian came 3rd in the "100 Players Who Shook the Kop" - an official Liverpool fan poll. Ian also had short spells playing at Chester City, Juventus, Leeds United, Newcastle United, Sheffield United, Wrexham and Sydney Olympic. He made 73 appearances for the Wales national football team and is the 2nd highest all time goal scorer for Wales. Ian now works as Club Ambassador for Liverpool FC. He also works closely with the Welsh FA and the U16 squad.

One of the most popular football players who have graced a Liverpool shirt and a confirmed achiever, Ian Rush MBE understands the many criteria at play in achieving your goals. As such he shows you what it takes not only to achieve but also to transfer your success to a new arena.

Ian Rush is an experienced media personality and his entertaining presentations are both informative and uplifting.

How to book Ian Rush MBE?