Karl-Theodor zu Guttenberg is the Chairman and a Founder of Spitzberg Partners LLC, a US based advisory and investment firm. As the youngest Defence Minister in German history, he led the most significant structural reform of the German armed forces since the Bundeswehr's founding.

"Mr. zu Guttenberg is a distinguished expert on political, economic and financial issues" 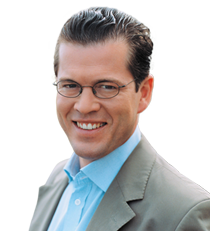 Karl-Theodor zu Guttenberg was a Member of the German Parliament (Bundestag) during 2002-2011 and served as spokesman on the Foreign Affairs Committee. Mr. zu Guttenberg was also a Member of the Parliamentary Assembly of the Council of Europe and Secretary General of Germany's co-governing CSU party. He is a Distinguished Statesman at the Center for Strategic and International Studies (CSIS) in Washington, DC and served as Senior Advisor to the European Commission leadership on global Internet freedom. He sits on a variety of international corporate and not-for-profit boards. Mr. zu Guttenberg has published numerous articles and is regularly interviewed across World Media.

One of Angela Merkel's government's star performers, he is no stranger to controversy. He offers an un-paralleled insight into world politics, foreign affairs, the economy and defence policy. With a strong background in technology and hands on experience defining the EU's "Internet Policy", Baron zu Guttenberg is also a highly sought-after commentator on technology development and effective use of the internet.

Karl-Theodor zu Guttenberg is a dynamic speaker whose messages are powerful and revealing, presented in the highest of professional styles.

How to book The Hon. Baron Karl-Theodor zu Guttenberg?