Edwin Moses is one of the most respected and recognized athletes of our time, renowned for his 122 consecutive wins in the 400-meter hurdles. He currently works as a financial consultant specialising in investment management consulting.

"Concentration is why some athletes are better than others" 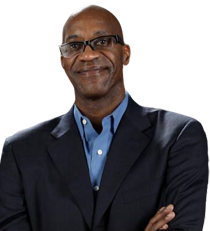 He won gold medals in the 400-meter hurdles at the 1976 and 1984 Olympics. Between 1977 and 1987, he won 107 consecutive finals (122 consecutive races). He set the world record in his event four times. In addition to his running, he was also an innovative reformer in the areas of Olympic eligibility and drug testing. He is known as a pioneer in the development & implementation of the sport's world's most stringent random in-competition drug testing systems.

He has achieved goals through his clear vision, sense of direction and self-motivation. A distinguished Olympic champion and world record holder Edwin shares his valuable secrets with audiences keen to learn from his experiences.

As a speaker Edwin Moses is as dynamic as he was an athlete. From his athletic, business and global background he has developed innovative and highly motivational presentations that have taken many businesses and individuals to their goals.

How to book Edwin Moses?