Former Footballer, TV Presenter and Founder of The DUBE

Dion Dublin is an ex Premier League and England footballer and away from football, he is extremely passionate about music and has invented a unique musical instrument called The DUBE, a stylish cube percussion instrument, with four playable sides each producing their own unique sound. He is the current presenter of Homes under the Hammer.

"One of England's best loved footballers" 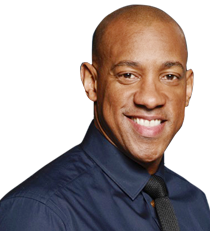 Dion was capped four times for England. He started his career as a centre-back with Norwich City, but made his name at Cambridge United as a goal-scoring centre-forward. However, in his later years he showed his versatility by becoming an accomplished defender. He had spells with Norwich City (twice), Cambridge United, Manchester United, Coventry City, Millwall, Aston Villa, Leicester City and Celtic. Since retiring from professional football in 2008 he has also built a successful media career as a football pundit for the BBC, Sky and ESPN. He has presented Late Kick Off for BBC1 East and can also be heard on BBC Radio 5 Live.

Dion provides audiences with an insight into his play days as well as what is needed to achieve success at this level. He also entertains audiences with his versatile DUBE and explains the easy transition to go from footballer to music.

Dion uses his experiences from being in front of the camera to deliver accomplished talks. He entertains audiences with tales of his years in the "beautiful game".

How to book Dion Dublin?