John Barnes MBE is a Jamaican-born English former footballer and manager, who currently works as a commentator and pundit for ESPN and SuperSport. Most recently he joined Channel 5 and is the channel's principal football presenter and regularly brings his insightful knowledge and understanding of football to television screens. 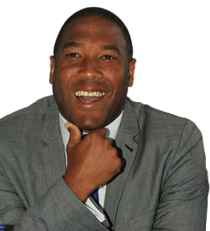 John retired from professional football in the summer of 1999 after a career lasting more than 18 years. During his playing career, Barnes had successful periods at Watford and Liverpool in the 1980s and 1990s, winning the First Division twice, the FA Cup twice, and playing for England 79 times (at the time, a record for a black player). After a period at Newcastle United, he ended his playing career at Charlton Athletic in 1999. John Barnes' brilliant solo goal against Brazil in the Maracana Stadium in 1984 marked his arrival at international level. His dazzling and intuitive play made him a firm favourite with the Kop at Anfield during his stay with Liverpool and in 1993/1994 John was installed as Liverpool club captain.

John inspires audiences with his presentations in which he draws upon his experiences on the football field to demonstrate the importance of teamwork in a business environment.

His amiable and relaxed manner has made John a firm favourite at events. His presentations are highly enjoyable and he is in great demand as a speaker.

How to book John Barnes MBE?