Former Member of the Executive Board of the European Central Bank 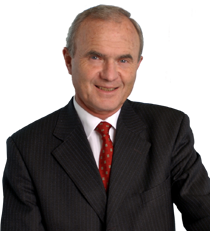 In 1990 Otmar Issing became a member of the board of Deutsche Bundesbank. From 1998 to 2006 he was the Member of the Executive Board of the European Central Bank where he guided the successful switch from national currencies to a stable and strong Euro. Since June 2006 he is President of the Center for Financial Studies and Member of the Advisory Board of Globalisation and Monetary Policy Institute at the Federal Reserve Bank of Dallas. Issing headed the Advisory Council on a New Financial Order appointed by the German Chancellor Angela Merkel (2008-2012). He was also a member of the High Level Group of the European Commission chaired by J. De Larosière.

Otmar Issing shows how to respond effectively to the challenges of globalisation. He provides audiences with his critical view on economic and monetary issues and their impact on the global economy. For the past few years, he has guided the ECB's economic thinking and the successful switch from national currencies to a stable and strong Euro.

A knowledgeable and respected economist, Mr Issing informs and educates audiences with his highly informative presentations.

He presents in English and in his native language German.

How to book Prof. Otmar Issing?