Joanna Rowsell is a cyclist on the Great Britain Cycling Team and has just competed at the London 2012 Olympics where she won GOLD in the Women's Team Pursuit. She is currently the National, European and World Champion and also the World Record Holder for this event. On her way to Olympic gold the team set their 6th successive World Record for the 3km event.

"It is a once in a lifetime opportunity: a home games, a gold medal and a world record" 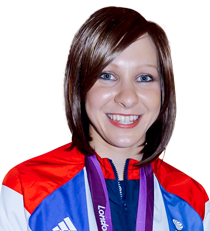 Joanna started cycling in 2004, aged 15, after gaining a place on British Cycling's Talent Team programme. In 2006 she gained a place on British Cycling's Olympic Development Programme and represented Great Britain in both the Junior European and World Championships on the road and track. In 2008 she competed in the Senior World Track Championships for the first time and won the first ever Women's Team Pursuit. 2008 continued to be a good year for her by also winning two National Titles on the road and 4 elite women's races in Belgium. The highlight was winning the women's races at two of the post Tour de France.

Joanna knows exactly what it takes to get the best out of a team. She explains the importance of leadership and shows how to succeed through training, teamwork and motivation.

Joanna's talk is relevant and entertaining. Her delivery is friendly, professional, funny, honest and extremely engaging. She captivates her audiences by her energy and enthusiasm.

How to book Joanna Rowsell-Shand?