Author of Investment Biker - Around the World with Jim Rogers

Rogers is a global investment guru who has been frequently featured in Time, The Washington Post, The New York Times, Forbes, The Wall Street Journal, The Financial Times, and most publications dealing with the economy or finance. He has also appeared as a regular commentator and columnist in various media and has been a visiting professor at Columbia University. 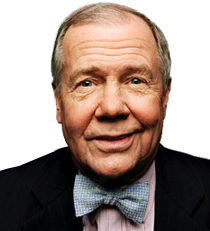 After attending Yale and Oxford University, Rogers co-founded the Quantum Fund, a global-investment partnership. During the next 10 years, the portfolio gained 4200%, while the S&P rose less than 50%. Rogers then decided to retire, at age 37. From 1990-92, Jim Rogers fulfilled his lifelong dream: motorcycling 100,000 miles across six continents, a feat that landed him in the Guinness Book of World Records. He chronicled his one-of-a-kind journey in "Investment Biker: On the Road with Jim Rogers". Rogers also embarked on a Millennium Adventure in 1999. He travelled for 3 years on his round-the-world, Guinness World Record journey.

Bringing these journeys to life at the lecture podium, Rogers offers individuals and corporations alike a lively, ground-level analysis of tomorrow's economic gold mines, while thrilling them with stories of his exciting adventures. He mixes wit with sometimes contrarian wisdom that offers new and enlightened ways to view our world.

An experienced speaker with a wealth of hilarious anecdotes, Jim keeps audiences spellbound with his incredible tales of adventure whilst at the same time offering invaluable advice and useful tips on market trends around the globe.

How to book Jim Rogers?