Francis Fukuyama, one of the world's most influential social and political philosophers, is Olivier Nomellini Senior Fellow at the Freeman Spogli Institute (FSI) for International Studies as well as Mosbacher Director of the FSI's Center on Democracy, Development and the Rule of Law at Stanford University. 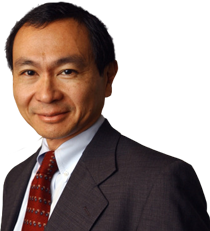 After graduating from Cornell University and Harvard, he was a member of the Political Science Department of the RAND Corporation for over 10 years and Professor of Public Policy at George Mason University. He worked in the US Department of State in Middle East affairs and was deputy director for European political-military affairs. He joined Stanford from the School of Advanced International Studies of Johns Hopkins University, where he was the Bernard L. Schwartz Professor of International Political Economy and Director of SAIS' International Development program. He is a member of the Board of Trustees of the Rand Corporation, of the Board of Governors of the Pardee Rand Graduate School, and of the advisory boards of the Journal of Democracy, the Inter-American Dialogue, The New America Foundation, Evolutionary Psychology and FINCA.

Historian and author of a number of important scholarly and popular works, Francis Fukuyama offers fascinating insights into issues relating to questions concerning democratization and international political economy and the transition into an information economy. Few thinkers have so strongly influenced the direction of modern social and political philosophy and public policy as Francis Fukuyama. He offers a valuable history of the ideas, people and actions that have brought us to this intersection and new ideas about how to relate to the rest of the world.

Francis Fukuyama is in constant demand around the world in the media and as a highly informative, knowledgeable and eloquent speaker.

He presents in English, French and Japanese.

How to book Prof. Francis Fukuyama?