The Right Honourable Jean Chrétien was the 20th Prime Minister of Canada. He led Canada during a crucial period in its history, maintaining the unity of the nation, ushering in a Free Trade Agreement with the United States and Mexico and presiding over an economic boom which continues to this day.

"His anecdotes offered both wisdom and humor, while his global insights provoked thought and discussion" Republic Financial Corporation 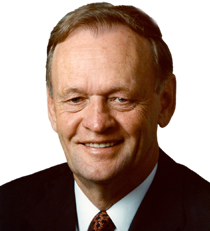 Trained as a lawyer and serving as Canada's twentieth prime minister, he made his mark as a legislator and statesman. His career spans more than 40 years in public service, through six prime ministers. He was first elected to Parliament in 1963, at the age of twenty-nine. Four years later he was given his first Cabinet post and, over the next thirty years, he headed nine key ministries holding many positions in the government including Minister of Finance, State, National Revenue, as well as Industry, Trade, and Commerce. From 1993 to 2003 he was Prime Minister of Canada and from 1990 to 2003 Leader of the Liberal Party of Canada.

Drawing upon his experiences, Mr Chrétien is in the privileged position to be able to offer audiences unparalleled insights into world politics and current affairs. When it comes to politics, no one better knows the players and the strategies than Jean Chrétien.

He is a captivating speaker on the most pressing global and geopolitical issues facing organisations today.

He presents in French & English.

How to book Jean Chrétien?