Jay Leno hosted the Tonight Show until 2014. In 2009 he launched his own talk show, The Jay Leno Show on NBC. He had - and has - a colossal work ethic, one that has led to great success. One of the country's premier comedians, Jay has appeared in hundreds of comedy shows around the United States for the past 20 years.

"One of the most recognizable personalities in the business" 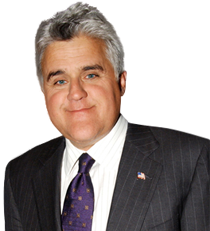 Jay Leno began his career in night clubs, where he was a popular comedian working 300 nights a year. Prior to becoming host of Tonight, James Douglas Muir "Jay" Leno had been the exclusive guest host on The Tonight Show Starring Johnny Carson since 1987. The Tonight Show with Jay Leno has experienced numerous highlights during its reign, including winning two Emmy Awards - in 1995 for Outstanding Comedy, Variety or Music Series, and in 1996 for Outstanding Technical Direction. In 1999 and 2000, The Tonight Show took home the trophy for Favorite Late Night Show in the annual TV Guide Awards. Jay Leno's personal highlights include receiving a star on Hollywood's Walk of Fame and being the first person to drive the pace car of all major NASCAR events.

Jay Leno's everyman style and personality have helped him earn millions of fans worldwide, but primarily in the regions where people can relate to his personable style and work ethic. He has been touted as one of the nicest people in show business and the hardest-working - a winning tandem for the man who says "Anyone can have a life - careers are hard to come by!" He remains passionate about performing in front of live audiences and will enhance any corporate or public event.

Though he can be sharp and is an astute political commentator, there is something nice and comforting about the soft-eyed, lantern-jawed funny man that appeals to vast audiences.

How to book Jay Leno?