Sir Christopher Pissarides was jointly awarded the Nobel Prize in Economics in 2010. He is holder of the Norman Sosnow Chair in Economics at the London School of Economics. He has served on the European Employment Task Force and is an authority on employment policy and other labour issues. 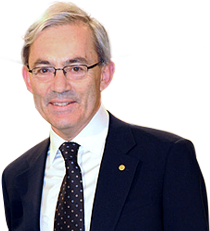 Sir Christopher served as Vice President of the European Economic Association in 2009, becoming President Elect in 2010 and President in 2011. He has served as Head of the Economics Department at LSE, and is an elected Fellow of the British Academy, the Econometric Society, the European Economic Association and the Society of Labour Economists. He is also a Non-National Senior Associate, Forum for Economic Research in the Arab Countries, Iran and Turkey and a former member of the Monetary Policy Committee of the Central Bank of Cyprus.

Sir Christopher explanations are clear, informative and expertly delivered, making him one of the most sought-after Nobel Laureates.

How to book Sir Christopher Pissarides?