James Kynge, Global China Editor for the Financial Times and author of the international bestseller 'China Shakes the World', based in Hong Kong. He writes about China's interactions with the outside world with a particular focus on high tech in Asia and edits a weekly newsletter on this topic. 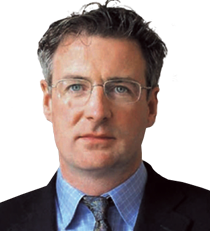 James has 20 years' experience reporting on China's rise. James was a Reuters' reporter in the 1980s, then worked as the FT Bureau Chief in Beijing for seven years until 2005, and subsequently was an executive heading up the Pearson Group of companies' operations in the PRC. As a journalist for over two decades in Asia, James covered several of the events that have helped shape the region, reporting from China, Taiwan, Japan, Mongolia, former Soviet Central Asia, Indonesia, Malaysia, Singapore and other locations. As executive overseeing businesses in media, publishing and education, he executed an ambitious market entry strategy that involved acquiring three Chinese companies, launching two start-ups and managing a complex matrix of government relations.

His presentations to business gatherings and investors generally focus on the economic implications of China's expanding global reach, its ascent up the technology ladder and the intensifying competitive environment. He is also a specialist on the "Belt and Road Initiative", China's programme to finance and build infrastructure in more than 80 countries.

A much respected voice on developments in China, his relentless pursuit of the truth allows James to offer unique presentations that are informative, insightful and unforgettable. James generally presents with slides in conference hall settings but does more discursive, humorous talks after dinner.

He presents in English and Chinese.

How to book James Kynge?