Isabel Allende is an internationally acclaimed author considered to be part of the Latin American feminist literary awakening. She is best known for her epic and highly autobiographical novel 'The House of Spirits', which was later released as a motion picture in 1993.

"We only have what we give" 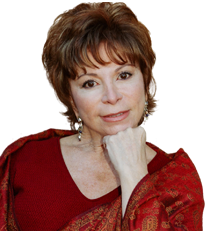 As a novelist and memoirist, Isabel Allende writes of passionate lives, including her own. Born into a Chilean family with political ties, she went into exile in the United States in the 1970s, an event that, she believes, created her as a writer. Her voice blends sweeping narrative with touches of magical realism; her stories are romantic, in the very best sense of the word. Just as vital is her community work: The Isabel Allende Foundation works with nonprofits in the San Francisco Bay Area and Chile to empower and protect women and girls, understanding that empowering women is the only true route to social and economic justice. Her novels have been translated into more than 42 languages and sold more than 74 million copies.

Isabel Allende uses her narrative skills to remind us that parallel to our placid and comfortable existence is another, invisible universe, one where poverty, misery and torture are all too real. In her presentations, she gives fascinating insights into how she is guided by a vision of a world in which women have achieved social and economic justice.

A passionate novelist and outstanding communicator, Isabel brings tremendous enthusiasm to each event.

How to book Isabel Allende?