Sabine Christiansen is the producer and presenter of the most significant and successful discussion forum on German television. The programme named after her, Sabine Christiansen, is televised live by the ARD, which along with the BBC is the largest television network in the whole of Europe. Sabine has interviewed the world's most notable politicians and business leaders, including George W. Bush, Tony Blair, Donald Rumsfeld, Colin Powell, Bill Gates, Kofi Annan, Angela Merkel, Vladimir Putin, Mikhail Gorbachev, Bill Clinton and Nelson Mandela.

"Sabine is one of Germany's most important political television presenters" 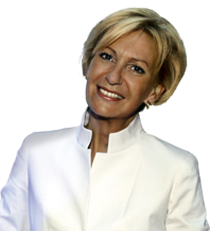 Sabine Christiansen launched her career in 1983 as a producer and later became the anchor of the nightly news magazine Tagesthemen on ARD. She has received numerous journalism awards, from the Grimme Award and the Bambi to Germany's Golden Camera. In 2005, she received the World Media Award.

Sabine offers a great knowledge of worldwide economic and political issues which along with her experience over the years make her the perfect host for any event. She is able to skilfully engage her guests in controversial discussions on current political topics or explosive issues.

Sabine's professional presentations are well prepared, convincing and relaxed. As a moderator she is renown for her extreme objectivity and her interviews show a remarkable feeling for timing.

She presents in English and German.

How to book Sabine Christiansen?