Aled Jones is a Welsh singer, television/radio personality, broadcaster and television presenter (Escape to the Country and Cash in the Attic) who first came to fame as a treble. He is notable for presenting Songs of Praise on BBC 1, BBC Radio 2's, The Early Breakfast Show, Good Morning Sunday and The Choir on BBC Radio 3. He performs as a lyric baritone, though he has expressed a desire to move into the traditional register of the tenor. 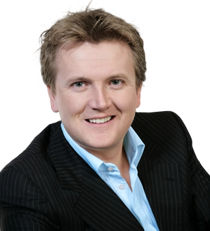 Aled became famous for the cover version of Walking in the Air, the song from Channel 4's 1982 animated film The Snowman. He sold over six million records before the age of 16. Jones went on to study at the Royal Academy of Music and the Bristol Old Vic Theatre School, before beginning his adult recording career, with a largely religious/inspirational repertoire. Jones has recorded twenty-four albums, many of which reached gold or platinum status in the UK and Australia.

Aled is considered an accomplished all-round performer. He is still singing and undertakes several concerts each year at venues around the UK and in Australia as well as presenting roles.

He thrills audiences everywhere with his singing, acting, dancing and broadcasting, presenting, drawing people to him with his warmth and good humour as well as his undoubted talent.

How to book Aled Jones?