Former US Secretary of State and 1973 Nobel Peace Prize Laureate

Henry Kissinger was the 56th Secretary of State of the United States from 1973 to 1977 and the 1973 Nobel Peace Prize laureate. He also held the position of Assistant to the President for National Security Affairs which he first assumed in 1969 until 1975. After leaving government he founded a consulting firm. A pivotal figure in global politics and foreign affairs he continues to travel the world in advisory functions and as a senior negotiator. 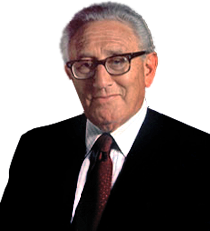 Widely recognized as one of the great American statesmen of the 20th century, Dr Kissinger talks about the current state of the world's political stage. He offers audiences great insights from his considerable expertise as the world's leading expert on U.S. foreign policy, international affairs and diplomatic history.

Audiences are captivated by Dr Kissinger's insightful presentations based on his incredibly career as one of the most influential and admired political figures in the world today.

He presents in English or German.

How to book Dr. Henry Kissinger?