David Coulthard enjoyed a long and spectacular career as a Formula One driver during which he drove for three of the most successful teams in the history of the sport: Williams, McLaren and Red Bull Racing. He is also a successful entrepreneur and ambassador to several high profile global businesses.

"One of the Greatest F1 Drivers" 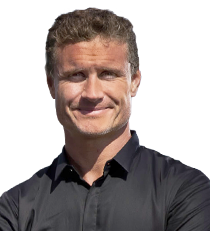 When he stopped racing in F1 at the end of 2008 he held the record for being the highest points scoring British Formula One driver of all time. Winner of 13 Grand Prix, including twice winner of both the British and Monaco Grand Prix, David achieved a remarkable 62 podium ﬁnishes which saw him race against world class competition including Michael Schumacher, Fernando Alonso and Lewis Hamilton. David has established a successful second career as a world class broadcaster and commentator, initially with BBC and more recently at Channel 4, for which David's production company Whisper Films produces the television coverage of F1 in the UK. In 2019 David became non-Executive Chairman of W Series, the world's first professional all-women single seater racing series, and he was elected President of the British Racing Drivers Club which owns and operates Silverstone Circuit in the UK.

Drawing upon his successful career as one of Britain's top F1 drivers, David offers audiences great insights into the strengths and challenges of an F1 driver. Using parallels from his time spent on and off the track working with prestigious teams, in speeches he lifts the lid on the high-risk, high-pressure, high-tech and high-finance world of F1 and looks at the innovation and teamwork required to succeed in the world's fastest sport.

An affable and likeable personality, David is in great demand as a speaker around the globe by audiences eager to hear his inspirational message. A unique opportunity offers David teaming up with Mark Gallagher, F1 Expert, to duet in bespoke high-octane Q&A sessions framing clients business messages and objectives, offering their sharp business insights all set against a background of exhilarating visuals.

How to book David Coulthard MBE?