Colin Firth is a world renowned star on stage and screen who first gained wide public attention for his portrayal of Mr. Darcy in the 1995 TV adaption of Pride and Prejudice. He achieved film stardom with the international success of Bridget Jones's Diary. In 2011 he received an Oscar for his performance as King George VI in The King's Speech.

Colin has performed songs in many of his films, including the worldwide hit, Mamma Mia! 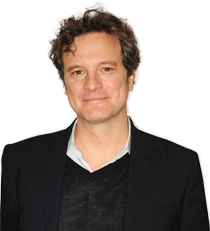 Colin Firth was discovered playing 'Hamlet' at the Drama Centre in Chalk Farm. His first professional role was as "Bennet" in the West End production of Another Country. From this performance, he was chosen to play the character of "Judd" in the movie of the play. He went on to play a variety of character parts in both film and television. It was his leading role in A Single Man and also for his performance in The King's Speech, which garnered him numerous awards including an Oscar. More recently he appeared in the Kingsman: the Secret Service (2015), Bridget Jones' Baby (2016) and Nose Day Actually (2017). Currently he is staring in Kursk, a film based on the 2000 Russian submarine disaster.

Perhaps one of the most recognised English actors today, Colin Firth is a convincing speaker whose strengths lie in his precise thinking, careful craftsmanship and mastery of technical skills. He is a highly talented actor who has carried his adolescent sense of rebellion around with him to great effect.

Well grounded and pragmatic, Colin Firth is an exacting perfectionist with a clear, logical, analytical mind and an aptitude for hard work and an ability to talk candidly about his professional experiences as a globally recognised actor.

How to book Colin Firth?